Doraku Holdings, Co.,Ltd. (Head office : Tokyo, Japan, CEO: Tomihisa Nishijima), was welcomed seven people from Myanmar as a new employees of the 2016 financial year.The Group start adopted ten people as the first times in 2014, the second times of seven people and this year was third times. In totally, have adopted 30 staffs of Myanmar people as full-time employee by the addition of employees, the local corporation of MyanmarDRK Co.,Ltd.

We have the great expectations to the growth of young people, having full of motivation, who are diligence, in addition of honesty, to become a leading IT engineers. We choose people as new staff and let to learn Japanese language among from people who have graduated from the (University of Computer Studies, Yangon), the top class of computer university in Myanmar.

This year of adopters came to japan in response to the pre-training of Japanese language over four months in MyanmarDRK Co.,Ltd. In the general assembly of our Group of companies, representative for new Myanmar staff did a speech that is he decided a strong commitment to a future growth and expressed an appreciation felling from the fact that he got the opportunity to working in Japan.

From now on will attend new employee training together with new Japanese employees such as IT technology and business manners over three months, and will be assigned to each IT Department. In the future, we are aiming can worked as an IT engineer, who can used English, Japanese, of course the native language of Myanmar (Burmese) in Japan, Myanmar and other Asian countries. Already have the employee, first times of graduation class, who worked as the offshore projects leader in MyanmarDRK Co.,Ltd. The Group will strive adoption of Myanmar employees, who will able to contribute as an engineer responsible for the development of the two countries of IT technology, as the driving force of the growth of Doraku group in the future. 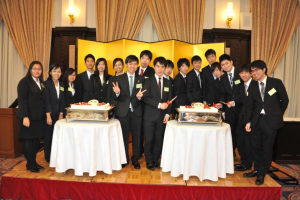 In the general assembly of Doraku group companies, which held in April 2 , Gakushi Hall (Chiyoda-ku, Tokyo)